...there it is!!! Now, that football is over it's time to take to the hardwood and shoot some hoops. Love me some college basketball. Even though I wasn't feeling 100%, because this darn cold won't go away I decide to shoot both the Boise St. at TCU and Denver at North Texas games on Saturday. Although none of the teams are having great seasons I was entertained by two great basketball games. 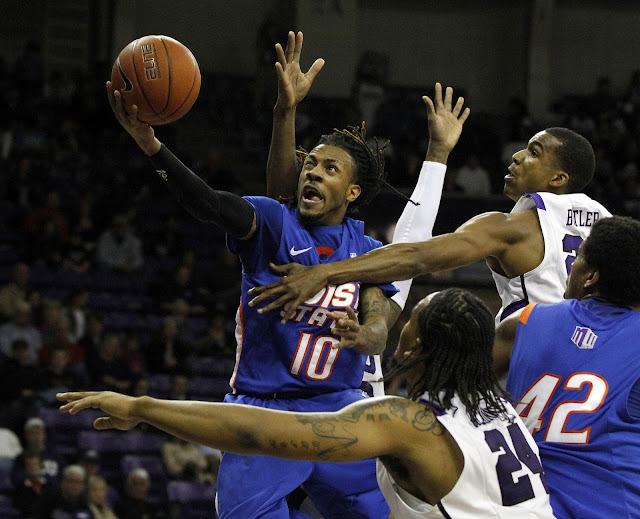 Boise St. led 50-34 with just under nine minutes remaining and the game pretty much looked over. But someone forgot to tell the Horned Frogs that as they went on a 20-2 run to close out the game and win 54-52 in Fort Worth. I really enjoyed shooting Bronco guard Tre Nichols (#10) a senior from Killeen, TX. He sports dreadlocks and can jump out of the building, a darn fun player to watch. Love the pix of him with one eye closed driving to the basket....ARGG! 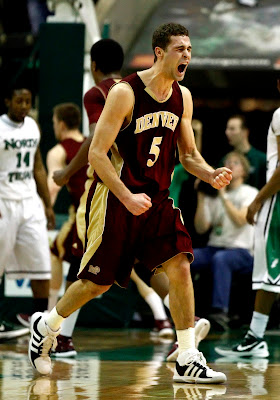 Then, it was time to drive up to Denton for a 7pm tip off between the Pioneers and Mean Green and once again I forgot how darn DARK the Super Pit really is. Patrick Green was shooting for U of Denver and had strobes set up. David Minton of the Denton Record-Chronicle was rocking the Nikon SB-whatevers! Me? Crank up the ISO and just shoot, bitches. It still amazes me what 6400 ISO looks like now days on the Mark 4 or 7D. I have to admit the first 10 minutes of the game I was in a fog! The action was fast and furious and I was in the dark. Until you shoot there you have NO idea how dark it is. Strobes or not, it's hard to focus, manual of AF!!! 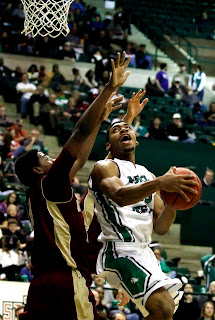 After moving to the other end of the court during a timeout I seemed to get my act together as it was about a F-stop or two brighter at the other end and I was able to start making images. And I am sure glad I did!!! UNT features freshman Tony Mitchell a 235, 6'8" forward from Dallas, who was a man was among boys scoring 30 points and out muscled Denver inside the paint. The Pioneers featured an outside game hitting on eleven 3-pt baskets. UNT lead by 7 with under a minute remaining but Denver fought back to tied the game at 66 as time expired in regulation. In a wild finish North Texas scored on put back off a miss with one second remaining for the 75-74 OT victory. So two games won by a total of 3 points (2 is the minimum) and a very entertaining day of making images!!! Here's a few....
Posted by RTCarlinPhoto at 11:19 AM